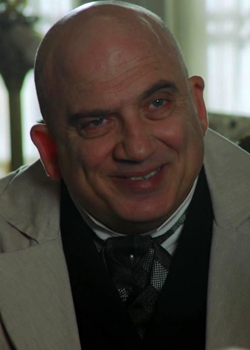 Dr. Arthur Lydgate is a minor character on Once Upon a Time in Wonderland and Once Upon a Time. He is a psychiatrist hired by a concerned father, whose daughter went missing for a long time and then returned with crazy stories of a Wonderland.

A rabbit hole explodes in the ground in the middle of some woods, next to an abandoned child's tea party that appears to have been left for a very long time. A young Alice emerges from the hole, having just returned from her very first visit to Wonderland, and joyfully states that she's home. She then runs across a fallen tree trunk, acting as a bridge, and then she proceeds to speed through a vast open field. She eventually reaches a long road and begins to call out for her father as she gets closer to her home. She attempts to open the door, but it's locked, so she knocks heavily on it, calling out for her father. He eventually opens the door and is shocked to see his daughter, who tells him that he won't believe where she's been. As she begins to tell the story of where she went, her stunned father asks if its really her, stating that everybody thought she was dead because she was gone a very long time. Later on, Alice overhears as her father talks to Dr. Lydgate. Knowing they don't believe her, Alice vows to herself that she will prove that Wonderland is real. ("Down the Rabbit Hole")

Lydgate's daughter, Mary, has him meet with a friend of hers named Dr. Jekyll, who's been working on a serum that should be capable of separating a man's personality into two halves - good and evil. He'd like to continue his research to complete the serum, but to do so he'd need the resources of the academy of which Lydgate is a member. Realizing that Jekyll is after a membership, Lydgate refuses to grant him one, calling his work dangerous. He then leaves with Mary, and that night has a party at his grand home. There, he is met by Mr. Hyde - Dr. Jekyll's evil half, although he doesn't know that - who threatens to tell Lydgate's wife and daughter about the affair he's been having with his young lab assistant should he not give Jekyll an academy pin. As such, Jekyll becomes an official member, and he tests the serum again by trying to use Hyde to seduce Mary on his behalf. It goes awry when Mary sleeps with Hyde instead, and when he wakes up as Jekyll, he kills her in a rage by throwing her out a window. Lydgate hears a disturbance and bursts into the room, right as Jekyll has turned back into Hyde. Hyde flees, and a witch hunt is instigated against him all across London. ("Strange Case")

Alice is stood quietly outside her house wearing a coat and holding a small luggage bag. The wind gently breezes through the air as a black carriage slowly makes its way down the road to the house. Inside the house, Edwin is watching his daughter sadly. Sarah approaches him and comforts him, assuring him it's best for Alice. Edwin wonders if Alice made the right choice so Sarah states she did and she was surprisingly wise. Sarah comforts him again, explaining that the doctor will take excellent care of her. Edwin says he hopes so and then they both look outside, watching the carriage come to a stop in front of Alice. Dr. Lydgate soon steps out of the carriage and takes Alice's bag as she gets inside. He follows her inside and then they begin to drive off. Back inside the house, an upset Edwin tells Sarah that Alice doesn't want him to visit the hospital, but Sarah comments that she's young and impetuous so the hospital will be good for her, helping her grow up. The two adults then look outside as the carriage drives away. As they do so, Millie runs up to them, and the family look happily at each other. From inside the carriage, Alice watches the happy family together and appears hurt. ("Who's Alice?")

After Alice's supposed second trip to Wonderland, she is committed to a mental asylum. Dr. Lydgate and two other professionals decide to give Alice a final examination, stating that she may be released if all goes well. At first, during the interview session, Alice seems vacant and gives very vague answers to the questions she is given. However, as the interview session proceeds, she begins to open up more and she claims that everything she said was false, however, Lydgate refuses to believe this, stating that she made it up as an adult and points out that isn't normal. She insists that she doesn't believe any of the Wonderland tales any more, but Lydgate points out that he knows she's lying because she still calls out for Cyrus in her sleep, a genie she claimed to fall in love with. At the mention of her lost loves name, Alice begins to cry, so Lydgate offers her a procedure that will help her forget. The two other professionals give glances knowing of the pain that will be involved. Wanting to forget, Alice signs the contract she is given and readies herself for the lobotomy. Later, as Lydgate prepares, Alice escapes the asylum with Will, now believing Cyrus to be alive. Lydgate tries to stop her but becomes speechless when he sees a talking White Rabbit. ("Down the Rabbit Hole")

At the Bethlem Asylum, someone is seen putting a small amount of Laudanum into a glass using a pipette. The person is Dr. Lydgate who then proceeds to drink the Laudanum. Suddenly, there is a knock at his office door, so Lydgate asks if he can help. Jafar, wearing the suit of the painter, opens the door and introduces himself as Dr. Sheffield, stating he's just arrived in London and he'd like to ask about a former patient. Lydgate is more than happy to help a fellow colleague so invites Jafar in, apologizing for the mess around him. Jafar tells him its all right and understands he probably doesn't get many visitors. Lydgate chuckles and points out that most people avoid asylums as they think there may be something contagious in the air. Jafar fains a chuckle. Lydgate asks what patient he wanted to know about, so Jafar describes Alice before stating her name. Lydgate is clearly shaken at the mention of this name and then lies, stating he doesn't remember anyone named Alice. Jafar points out that the man does remember as how could he forget the patient who escaped with the help of a talking rabbit. Lydgate tells Jafar that he has no idea what he means, so Jafar questions this because he saw it with his own two eyes. Jafar reaches to the ground and picks up a large leather bag. Lydgate is startled by this and states that a talking rabbit is madness. Jafar tells the doctor that sometimes the maddest stories are the truest ones before opening the bag, revealing the White Rabbit. Lydgate is horrified and begs for him to put it away as he's tried so hard to forget. Jafar closes the bad and states he now needs the doctor to remember, asking to know everything about Alice. ("Who's Alice?")

1 of 3
Add photo
Retrieved from "https://onceuponatimeabc.fandom.com/wiki/Arthur_Lydgate?oldid=99106"
Community content is available under CC-BY-SA unless otherwise noted.