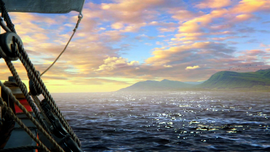 Arendelle is a realm in the Fairytale Land and just across the sea from the Enchanted Forest, ruled by the Ice Queen, Elsa.

As children, the three princesses, Ingrid, Helga, and Gerda chased a kite out in the field, but were nearly kidnapped by the man who owned it. Ingrid saves her two sisters by using her magical ice powers, and in return Helga and Gerda promise to help the eldest princess conceal them. Years later, the sisters have all grown and Ingrid realizes she will be unable to control her powers. The sisters travel to Misthaven and seek out Rumplestiltskin, who provides them with a pair of cloves to conceal the powers, and a magic urn to trap the princess if she becomes too dangerous. Things later take a turn for the worse when the Duke of Weselton learns of Ingrid's powers. When threatening to reveal her magic to the citizens of Arendelle so she's deemed a monster, the angry future queen tries to blast him with magic, but hits Helga instead, turning her to a frozen statue, which shatters, killing her instantly. Gerda soon learns of this and immediately traps Ingrid in the urn, and later goes to Grand Pabbie to have everyone's memories erased of Ingrid and Helga. ("The Snow Queen") More years pass and Gerda becomes queen, gets married, and has two daughters: Elsa and Anna. When Elsa exhibits powerful and dangerous ice powers, Gerda and her husband track down a pirate, Black Beard, back in Misthaven, and bargain with him to obtain a wishing star. ("Fall") On their way home from Misthaven, the royal couple are caught in a vicious storm at Poseidon's Boneyard, and when realizing neither will survive, Gerda writes a note to her daughters and puts it in a bottle before throwing it into the sea. The ship then collapses and the queen and king pass. ("A Tale of Two Sisters")

Five years have passed and Elsa is now the Queen. She and her sister Anna prepare for the latter's upcoming wedding to ice merchant Kristoff, but when discovering their parents journal and learning they were heading to a mysterious destination that may have held the secret to containing Elsa's powers, Anna leaves for a journey to Misthaven to find answers. ("A Tale of Two Sisters") As if Elsa didn't already have enough on her plate with worrying about Anna and all, she soon learns Hans and his brothers are plotting to entrap the Ice Queen in a magic urn. She and Kristoff set off to destroy it, but Hans gets it, however, when opening it, the Snow Queen emerges. She freezes Hans and reveals to Elsa she is none other than her mother's sister, Elsa's aunt. ("Rocky Road") Anna soon arrives home from Misthaven, bringing with her a mysterious box she stole from Rumplestiltskin. Unlike Elsa, she doesn't immediately take well to her Aunt Ingrid, and decides to go to Grand Pabbie for answers. Along the way, she meets Belle who is also on her way to the rock trolls for answers of her own. Once learning there's more to Ingrid than what's been said, Anna and Belle try to get back to the castle, but the Snow Queen takes the princess captive. ("Family Business") Ingrid lies to her niece, claiming Anna betrayed her and intended on using the Sorcerer's hat on her. Knowing this isn't true, Elsa secretly frees her sister and the two of them, along with Kristoff decide to locate the magic urn and trap Ingrid inside, knowing she is no good. The plan backfires, however, as Ingrid uses the Spell of Shattered Sight on Anna, causing her to trap Elsa in the urn instead. She then freezes all of Arendelle and erases Elsa's recent memories so she won't know of what all has transpired. Rumplestiltskin soon arrives for his stolen hat, but when the Snow Queen refuses to hand it over, the Dark One takes the urn instead. Wanting Elsa back, Ingrid gets the hat to make the trade, but the Sorcerer's Apprentice arrives and stops her, making a deal to find her third "sister". He sends her through a portal door to the Land Without Magic, knowing one day she, Elsa, and her third "sister" shall be together. ("Smash the Mirror")

Thirty years after Arendelle was struck by Ingrid, Anna, Kristoff and all others in the kingdom finally unfreeze, which means Hans and his brothers are also free to attack the princess and her fiancé. They manage to escape, however, and decide to locate the pirate Black Beard so that they can pay him with their riches for something called the wishing star, which Anna read about in her mother's diary. Soon after they arrive on the ship and make their offer, Hans and his brothers show up yet again, having robbed the royal treasury and made their own deal with Black Beard beforehand. The pirate then sails them all out to the same spot where Anna's parents' boat sank and, per Hans' directive, the two of them are sealed in a chest and thrown overboard. Water begins filling the chest and it seems as though the engaged couple is about to drown, and so Anna tries marrying Kristoff before they both die. He refuses, however, saying that they can get married when they get out of this and, soon enough, the two of them are transported to the town of Storybrooke by Elsa, who used the wishing star (which turns out to be Anna's necklace) to wish for them to be there. ("Fall") After Ingrid sacrifices herself to end her plans of killing the town, leaving only her, Elsa, and their third "sister" Emma, Anna, Elsa, and Kristoff return back to Arendelle where they take the kingdom back from Hans, and Anna and Kristoff finally get married. ("Heroes and Villains")

Retrieved from "https://onceuponatimeabc.fandom.com/wiki/Arendelle?oldid=107779"
Community content is available under CC-BY-SA unless otherwise noted.