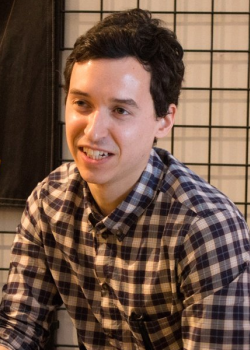 Andrew Chambliss is one of the producers and writers of Once Upon a Time.

Chambliss began his career working as an assistant to the executive producers on Crossing Jordan and Heroes, after which he worked as a story editor on the short-lived 2007 remake of The Bionic Woman.

In 2009, he joined the writing staff of Joss Whedon's philosophical science-fiction series Dollhouse. His first script was the ninth episode of the first season, "A Spy in the House of Love". He continued to work on the show as a writer and story editor through the show's second season, for which he wrote four episodes, including the series finale.

After the cancellation of Dollhouse, he wrote an episode of the Starz historical epic Spartacus: Blood and Sands before joining the staff of The Vampire Diaries on The CW.

Chambliss is the main writer of the ninth season of Buffy the Vampire Slayer. He said in an interview to Hero Complex, "'Buffy' is such a huge part of what made me want to become a writer, especially in television". ‘Buffy’: Season 9 writer hails from another vampire camp.

In the summer of 2011, Chambliss joined the ABC fantasy series Once Upon a Time as a writer and co-producer.

The following is a list of episodes of Once Upon a Time that credit Chambliss as their writer.

Retrieved from "https://onceuponatimeabc.fandom.com/wiki/Andrew_Chambliss?oldid=113610"
Community content is available under CC-BY-SA unless otherwise noted.